C’mon, baby, let the good times roll: While the world experienced a 4.3 percent growth in international tourist arrivals (UNWTO’s latest figures for 2015), Caribbean arrivals rose 6 percent. That beats every other region on earth.

Along with growth has come new resorts and nonstop flights, infrastructure upgrades (airports, roads, the late-night ferry to Anguilla, entire cities), and the “discovery” of Cuba, and huge swaths of the Dominican Republic. Resorts are innovating: More are offering swim-out rooms (e.g. at Sandals LaSource Grenada, Hyatt Ziva and Zilara, Sonesta Ocean Point Resort) that increase demand for ground-floor rooms, Sandals and Zoëtry are building overwater bungalows, a new food festival is born every 14 minutes, and even resorts on arid islands offer farm-to-table dining (thank you, CuisinArt Golf Resort and Spa greenhouse) along with an extensive choice of cuisines. Caribbean chefs are also catering to people on vegan, gluten-free, and other diets. FYI, there is no gluten in artisanal chocolate—a good thing, too, because dark chocolate is the new black.

In 2015, I wondered if the wellness movement could possibly get any bigger (see Spa Wars in the October 2015 issue or almost any other story Recommend has run on this), but then, every year I ponder that, only to witness the opening of yet more spas the size of Kansas that offer everything from Ayurvedic karate to Absolutely Authentic Amerindian treatments.

So what other trends are rocking the Caribbean?

airlift ascending
Having increased its route map to more than 20 Caribbean destinations, Delta Air Lines has added two more, Marsh Harbour and North Eleuthera, and it shows no sign of stopping. Southwest and United are taking Houstonians to more Caribbean islands, and Norwegian now connects Boston, New York and Baltimore with French islands.

American Airlines has added some flights, including an LAX-MBJ nonstop. Will Californians visit the Caribbean if the connections are better? Yes. So will Americans who live near secondary airports, because Apple Leisure Group plans to add charters to Punta Cana, whose new terminal offers pre-clearance (see Apple Leisure Group Is Growing on recommend.com).

Meanwhile, Seaborne has signed interline agreements with JetBlue, Delta, and United and added more routes. Jamaica’s new highways will enable more people visiting resorts in and near Ocho Rios to arrive via Kingston. But JetBlue’s new Mint service to Aruba and Barbados? Unless it’s heavily discounted, I don’t believe this will become a trend, because a flatbed seat on this short flight does not compute.

cuba—need we say more
The U.S. travel media are ecstatic about Cuba, but observers are cautious, pointing out that the 55,000 U.S. citizens who visited Cuba January-May 2015 represented a 36 percent increase over those months in 2014, but 55K is still a relative pittance. Although the number of people-to-people tours, charter flights, cruises, and U.S. citizens visiting Cuba from third countries has soared, and despite plans for Banyan Tree’s Dhawa Cayo Las Brujas and two Ocean by H10 resorts, Cuba simply hasn’t enough hotels, especially luxury resorts. (Peggy Goldman of Friendly Planet Travel concludes, “People-to-people packages will continue even if they’re not mandated.”)  However, let’s get back to airlift: On Nov. 9, Cuban officials stated that normal, scheduled flights may soon be legal, and that could change everything for travelers, tour operators, and hotel developers.

when will dominican tourism stop growing?
Beats me. New highways and the restoration of Santo Domingo have created a boom in the capital. The southeast is still sprouting resorts, and the north coast has been reborn, thanks to Carnival Cruise Line’s Amber Cove port, the Bahia Principe Samana Don Pablo Collection, two Wyndham resorts, Amanera, Gansevoort Dominican Republic, Playa Imbert and more. The addition of Aman and Gansevoort properties will lure chic jetsetters and finally kill the notion that the D.R. is only about price-driven resorts.

other hotspots?
Almost every island from the southern Caribbean to Bermuda.

For example:
The Dutch Caribbean: Aruba has broken the million-visitors mark, and Curaçao is enjoying a 21 percent rise in North American arrivals. At the recent Caribbean Tourism Organization’s State of the Industry Conference, Curaçao Tourist Board’s marketing director Andre Rojer declared, “within two years we will double arrivals from North America.”

Barbados: Air Canada Rouge and JetBlue have added nonstops, and Sandals has helped fuel a hotel boom that will soon include Wyndham and Hyatt. Over the next five years, Barbados plans to add 2,300 hotel rooms.

Jamaica is doubling hotel rooms, too: “1,600 new, high-end rooms opened this year…and we expect about 6,000 over the next five or six years,” said Minister of Tourism Wykeham McNeill at JAPEX. Karisma alone is building nine resorts in Jamaica.

Guadeloupe and Martinique have attracted more airlift, but can French-speaking islands really attract more Americans? These French Islands have attracted Americans in the past, and the new air service is sure to lure them back.

St. Kitts: Through Kittitian Hill, this island is forging a new Caribbean model: lodgings and activities for high-end sophisticates who care more about cuisine, health, nature, and experiential travel than about the beach. As for its edible golf course (organic, of course)—talk about converging trends!

St. Vincent and the Grenadines still gets few North American tourists, but stay tuned: The new airport will (finally) change that.

active pursuits on the upswing
Word on the street is that younger adults are embracing active pursuits, so savvy hoteliers are providing more mountain bikes, JetLev gizmos, trapeze lessons (Club Med—who else?), and Olympic-level workout facilities. However, even though most upscale travelers want more than golf these days, partisans of this slow game will continue to pay premium for access to the great courses of Barbados, Bermuda, the Dominican Republic, etc. That’s why Aman, which understands high-end travelers so well, has designed Amanera as the first golf-integrated Aman resort on earth.

are all-inclusives the new normal?
When I asked Jamaican officials what percentage of the island’s hotel rooms are in all-inclusives, the answers ranged between 74 percent and 82 percent. Alex Zozaya of Apple Leisure Group said, “The all-inclusive category of resort is growing the fastest—seven or eight to one.” Even once-unlikely companies are entering the business: Hyatt, Hilton, and Wyndham. Grand Lucayan has finally created an all-inclusive sub-resort (Lighthouse Point) to meet demand, and the Wyndham Grand Rio Mar has unveiled a much-needed all-inclusive option in Puerto Rico. So you have to wonder: Will a la carte classics like Half Moon or Cobblers Cove offer all-inclusive plans? This is one trend to watch. 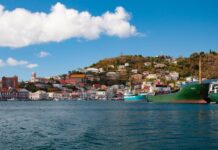 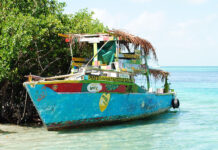 Belize to Reopen in August 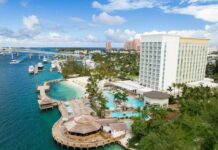 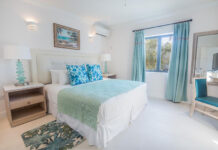