Scotland is small but exemplifies the old axiom that less is more. Its 34,000 sq. miles make it roughly the size of Maine, yet its distinctive culture might be the envy of larger countries. This is a land of kilts, attractive people who speak a delightful brogue accentuated by rolling r’s, vast landscapes and an astounding beauty that sways to the skirl of bagpipes. Sadly, at least in the North American market, Scotland is seldom thought of as an adventure destination.

Few realize that this wee land with a tad more than 5 million people whose forbearers influenced practically every corner of the world is custom-made for those seeking thrills against the backdrop of stunning scenery.

Behind the well-worn stereotype of images full of rolling green hills where sheep graze contentedly, ancient cities, smoky whiskies, fêted golf courses and palaces and castles that are the topics of legend, this is a land full of adventures and excitement.

American travelers in particular would be bowled over to learn that an entire dimension of active pastimes lies hidden behind Scotland’s genteel veneer.

Sure, those visiting to go mano-a-mano against nature in tough settings like the impossibly high peaks of the Highlands; to defy angry streams renowned for their unparalleled fly-fishing where raging currents will push canoeists and kayakers to the limit; to trek over feral terrain crisscrossed by trails that scream to be hiked or pedaled through on mountain bikes, must venture beyond Scotland’s great cities.

Scotland is easily reached from the U.S. through its two major points of entry: Edinburgh and Glasgow. Continental Airlines, U.S. Airways, American Airlines, United Airlines and other major carriers service those cities from either the U.S. west or east coasts.

It’s easy to be enthralled by the magnetism of Edinburgh and Glasgow, ancient cities with a zesty cosmopolitan flavor, where visitors can easily be tempted to spend their entire Scottish experience delighting in the savoir-faire there. But if a client wants a taste of the Scottish outdoors, the possibilities seem endless.

A thrilling activity popular in Scotland is canyoneering (called canyoning in Europe), a pastime that became popular in the canyons of the western U.S. rivers decades ago. While canyoneering, participants test their mettle against the forces of nature as they rappel down sheer canyon walls into rushing rapids.

This is an adrenaline-fueled activity practiced mostly in the spectacular River Garry gorge near the village of Calvine in western Perthshire, a large area of Scotland known for a diverse landscape that ranges from large agricultural valleys to the impossibly high mountains that make up the backdrop of the southern Highlands.

In fact, visiting pastoral paradises like Perthshire and Kinross, the Highland regions where most of Scotland’s outdoor activities are practiced, will make one understand why Europeans rank Scotland as one of the top destinations for outdoor sports in the continent.

A splendid start for exploring this side of Scotland is with a stay at the Fortingall Hotel in the village situated in the middle of the Highland Perthshire and regarded as one of the prettiest in the country. This captivating hotel abuts a 19th century church that has the obligatory graveyard near its doors and what botanists say is probably the oldest tree in Europe, a 5,000-year-old yew.

Fortingall was already gracing the Scottish countryside when the Romans made camp in a meadow near the River Lyon. Legend has it that a legionnaire impregnated a local woman and took the child to Rome to be raised in privilege. The half-Scottish kid went on to become Pontius Pilate, the Roman Procurator of Judaea who sentenced Jesus Christ to death.

The Fortingall is a 10-room treasure that, according to general manager Roddy Jamieson, can best be architecturally described as, “The result of the Arts and Crafts movement that was prevalent during the Victorian Age.”

According to Jamieson, a wing dates back to the 1600s; its final restoration taking place in 1888 when a shipping magnate converted it into a hotel. 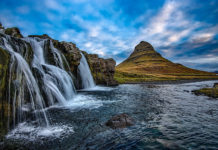