“You’ll be staying in the Silver King,” said my camping butler, Wesley. That’s right. A camping butler. That decadent amenity was human icing on the cake during an early summer “roughing it” weekend at The Resort at Paws Up’s new Pinnacle Camp.

Perched on a bluff overlooking the confluence of the Blackfoot River and Elk Creek, this rustic chic encampment is privy to one of the most breathtaking views on the 37,000-acre “Big Sky” spread—more than 60 sq. miles of untamed wilderness 30 minutes east of Missoula that’s steeped in Lewis and Clark history.

Pinnacle Camp debuted with six canvas-walled, safari-style retreats individually named after prominent Montana mountain peaks. Outfitted with electricity, each is also tricked out with a spacious en-suite bathroom sporting a jetted tub and shower. Four 1,030-sq.-ft., 2-bedroom units are furnished with a king bed and two twins, while a pair of 565-sq.-ft., 1-bedroom tents come with kings.

With a roster of high-end touches crowned by butlers, there’s really not much “roughing it” here. Sure, when temperatures dip into the 40s at night, it’s a bit chilly. But feather beds dressed in 300-count linen sheets are armed with electric blankets. Plush pile accent rugs warm wooden floors, while sheepskin and cowskin throws drape leather sling chairs. And bathroom slate tile flooring is heated, as are towel racks.

Cowboy chic runs amok with Pinnacle’s rustic furnishings, art-adorned walls and deck furnished with Adirondack chairs so guests can laze and gaze at the river below.

Sure, there’s no closet for hanging clothes or iron for working out the wrinkles. And don’t plan on tuning into the nightly news on an oversized flat-screen—although there are TVs at Tank Bar in the Cook Shack. “We had to stay true to some of those naturals that come with traditional camping,” says John Romfo, the property’s director of sales and marketing.

There’s nothing quite like falling asleep to the lullaby of the babbling Blackfoot, then awakening when your butler taps on the door. Yep. There’s actually a door on these swanky tents. Always at our beck and call, Wesley and his counterpart, Ryan, handled everything from starting nightly campfires for gourmet s’mores, to arranging transportation to the ranch’s Wilderness Outpost for daily activities.

When we quizzed him, Wesley explained that the Paws Up name resonates owners Dave and Nadine Lipson’s love of animals and genuine hospitality. It originated nearly 15 years ago when they would visit a ranch where two dogs always greeted them with two paws up. The moniker reflects those friendly canine encounters.

Even the dining pavilion is a cut above with its fireplace, leather sofas and family-style dining tables. “Walls” of floor-to-ceiling canvas curtains open to the Blackfoot, towering conifers and brilliant sky. Each morning, chef Amber brings new meaning to haute grilling as she preps short-cakes with warm huckleberry syrup, fluffy made-to-order omelets and chicken apple sausages.

Throughout the day, Wesley and Ryan stocked the facility with soft drinks and snacks. Lunch, dinner and libations are served at Tough & Tank, and Pomp located at the Camp Shack near the Reception Barn. Drawing from the West’s agricultural wealth, fare showcases the region’s freshest catches, meats, produce and ingredients.

As the resort’s gourmet restaurant, Pomp shines with chef Wes Coffel’s “farm-to-table” culinary movement. After a full day of horseplay and a belly full of the tastiest morsels west of the Mississippi, there was always still a smidgen of room for s’mores back at the camp.

the rest of the ranch Paws Up’s inventory includes three additional 6-tent camps—Creekside, River and Moonlight. Creekside features that same en-suite bathroom convenience, with the adults-only Moonlight poised to jump on the bandwagon next season. The family-oriented River Camp assigns each tent an exclusive master bathroom in the bathhouse just steps away. All campsites are open from late-May to the end of September.

“Families or even three couples can book the Wilderness Homes and share the space,” Romfo says. “Each couple has their own master suite and bath, with a living room, kitchen and deck with hot tub as common areas.” 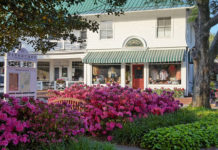 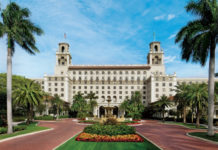 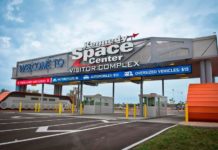