Terry Dale, the president and CEO of USTOA, revealed a plethora of information useful to the association’s active members and travel industry attendees at its general sessions—from the creation of its new travel agent online education program to the success of its campaign, Travel Together, and even spotlighting the millennial generation with a roundtable discussion on “Why Millennials Matter?” where a group of millennials spoke about ways tour operators should market to them, and what they are looking for in a vacation—authentic experiences and access to WiFi so they can share their photos via social media platforms.

“What the millennials are looking for in travel experiences are not that much different than what the Boomers want, such as an increased desire for culture immersion, authenticity, and a willingness to spend money on travel,” said Dale. “I don’t think there is really this huge difference between our bread-and-butter today [Boomers] and our bread-and-butter of the future [millennials], so what I’m tying to get my members to recognize is not to turn their backs on this audience because there is potential, and so you need to start thinking about it and cultivating it.”

But the in-depth news regarding travel trends and the economic impact of travel for 2015 came from a study conducted by PriceWaterhouseCoopers where it was shown that active members of USTOA contributed $12.5 billion to the U.S. tour operator industry in 2013, representing more than 7.6 million individual travelers. It was also reported that members are predicting an increase in sales of 8.7 percent in 2014; a 95 percent growth in sales in 2015; and on the job front, members predict an increase of 4.7 percent, or about 12,350 new jobs hired in 2014—within the survey, active members reported hiring 11,800 people in the U.S. in 2013.

In other interesting news, when members were asked to name the top 10 destinations for 2015, they ranked the UK as No.1, followed by China, Peru, France, Mexico, Australia, South Africa, Brazil and Vietnam. But the topic of conversation—mentioned during a press conference and at the general session—was the No. 2 spot on the list of “emerging” countries that members forecasted will become popular in 2015, and that was Cuba.

When asked if the people-to-people licenses will be effected when President Obama leaves office, Dale said he believes that “between now and when a new president is elected, I don’t think things are going to get any worse, even though the Republicans gained control of both the House and Senate. I don’t think we’ll take any steps back, but I don’t think we’ll be taking any forward between now and the election. But to see Cuba come up as No. 2 on our emerging destinations list was wonderful, and we have, as far as we’re aware, 15 different companies that are USTOA members with people-to-people licenses.”

Another interesting point taken from the survey revealed that travel agencies represent 67 percent of total packages sold in 2013—a number sure to increase in 2014 and 2015, and Dale agrees. “I believe it will [increase], and we have a responsibility as an association to help build that. The more we engage them and the more they understand our members, and the diversity of our members, and sell our members’ products, the better it is for all of us.” 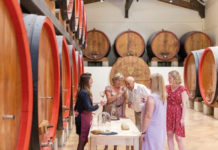