Good things come in small packages, and Bermuda is no exception. From its pink sand beaches to its gorgeous limestone cliffs, this island is a slice of heaven. But Bermuda is far more than just beautiful landscape. In fact, with a diverse population that includes descendents from West Indian and West African slaves, English settlers, and even Portuguese immigrants, this island boasts a thriving culture and rich history.

A Storied Past With its British colonial history fused with African heritage, Bermuda’s culture has developed into something unlike anywhere else in the world. As Britain’s oldest colony, its influence continues to dominate the island’s government, educational and legal institutions. During their visit, vacationers may spot judges walking through Hamilton in powdered wigs, see a bobby directing traffic or overhear a passionate conversation about a local cricket match.

African influences, while subtler, can be found in local dance and music, especially reggae, calypso and the rhythm of the Gombeys—dancing and drumming troupes that often perform on the streets. Your clients can also get a glimpse into the island’s African history by taking a self-guided tour along the African Diaspora Heritage Trail. Here, they’ll see a slave graveyard and St. Peter’s, the oldest church in the Western Hemisphere.

Meanwhile, Bermuda’s cuisine is also a reflection of the island’s blended heritage and coastal access to premier local seafood such as wahoo and rockfish. Traditional dishes include “peas and plenty” (black-eyed peas with onions, salt pork and sometimes rice), “hoppin’ john” (peas and rice), “pawpaw casserole” and “Bermuda fish chowder.”

The Town of St. George—Where it All Began The Town of St. George, named after the legendary dragon slayer and patron saint of England, was Bermuda’s capital for more than 200 years. Today, nearly four centuries later, evidence of its remarkable history abounds. While it is a popular center of business and retail activity, it is the town’s history, visible in its picturesque cottages, quaint lanes and alleyways, and its wealth of military, civic and religious architecture, that attracts visitors from all over the world. In fact, the Town of St. George was listed as a UNESCO World Heritage site in December 2000. It is also the oldest English-speaking colonial town still in existence.

Here, recommend your clients visit St. George’s Historical Society Museum. Furnished much as it was when it was a private home, this typical Bermudian structure from the early-1700s houses artifacts and documents pertaining to the island’s earliest days. The house is filled with period furniture, documents, old letters, displays of pewter, china and rare books. And if historical re-enactments are more your client’s style, be sure they check out King’s Square, where guided tours through narrow alleys and lanes of St. George’s are offered daily at 10:30 a.m.

For more information on planning your client’s next visit to Bermuda, visit the Bermuda Department of Tourism at gotobermuda.com. 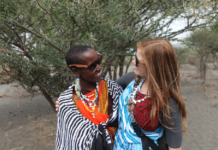