It’s hard to think of major cruise lines with their thousands of passengers and enormous ships as “green” entities, but, in fact, the cruise industry has been a major force in “green” tourism over the past several years, spending huge sums on researching new and effective ways to reduce not only their carbon footprint, but also by minimizing all environmentally negative aspects in their day-to-day operations.

Certainly, stricter government regulations set the benchmark for cleaner burning fuels, and many lines are spending millions of dollars upgrading fleets to meet those demands, but at the same time, they’re also saving money on fuel and energy costs over the long term.

Throughout the industry, cruise companies have been doing a variety of things to minimize negative environmental activity. In 2009, Holland America, for example, reported that all its ships are ISO14001 certified, which means a specific environmental management plan was created to give them guidelines for going green and maintaining that status. Some of the changes included converting to all non-toxic, green cleaning supplies, replacing the current dry cleaning detergents with new detergents that use soy, banana and orange extracts, as well as encouraging towel re-use and adding a system at each photolab that can recover the spent silver from the developing process and recycle it. Shorter routes take into account tide schedules to maximize fuel efficiency and silicone paint was added to the hull of their ships to reduce drag, helping the engines to be more efficient. New scrubbers were added to reduce its emissions and particulate matter, and like most ships, Holland America ships run on plug-in power at port so they don’t have to continue running, thereby reducing particulate emissions while at shore. To keep rooms cooler, a dark film was added to each window to blow out some of the sun, which also helps cut down on the work that air conditioning units do, also saving money and energy.

Celebrity Cruises’ Solstice ships were one of the first to install 216 solar panels on board to power the elevators or the 7,000 LED lights. They also updated the lights, saving 50 percent on energy demands and of course, the ships are designed to be as aerodynamic as possible, plus their water filtration system returns all black water and waste water to near-pristine conditions before it is dumped back into the ocean. They also installed heat-transfer windows to cut down on cooling needs and to allow in more natural light, which cuts down on electricity needs. As for eliminating waste materials, aluminum and tin are recycled, and glass is crushed before it is offloaded on shore. Other materials like batteries and light-bulbs are collected, but unfortunately all other materials are incinerated on the boat. Engine oil is separated and cleaned to ensure it does not end up in the water and is also left when the boat docks at port cities.

The laundry facilities on the Disney ships all use water that is generated from the air conditioning system—specifically 280 tons a day of water, all of which is generated on board. Excess heat is used to power evaporators that turn 1,200 tons of seawater into potable water each day. Each ship has an environmental officer on board to monitor ships and teach environmental education classes to both staff and guests, and all staff are involved in the environmental initiatives department which includes cast and crew from the resorts, as well as the cruise lines to come up with new ways to improve the environmental footprint of the entire company. The ships are also trying innovative things like reusing waste cooking oil on their private island Castaway Cay to power heavy machinery, which saved 8,000 gallons of fuel last year. And, by recycling traditional materials from the ship like aluminum and cardboard, they diverted over 405 tons of materials from the waste stream, while non-traditional materials like ceiling panels, scrap metal and excess plastics, are also recycled through a partnership with Keep America Beautiful. Reusable furnishings and materials from the ship are donated to needy communities in port communities.

Royal Caribbean International qualified for both ISO14001 and ISO9001 certification, which establishes an environmental management plan and all its ships have environmental managers aboard and environmental training for all staff, requiring them to be able to explain the environmental policies to all guests. The company also started a policy a couple of years ago ensuring “Nothing Goes Overboard!”, which means officers have to come up with a way to limit waste and responsibly dispose of everything else. To reduce waste, they eliminated disposable utensils and started buying condiments in bulk and worked with suppliers to only purchase items with minimal packaging, a big savings when you’re looking at 3,000 passengers and over 1,000 crew and staff. All plastic water bottles were eliminated in exchange for biodegradable and reusable options and a couple of years ago, they spent $100 million to convert its waste water treatment system on board to an advanced purification system. 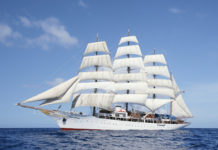 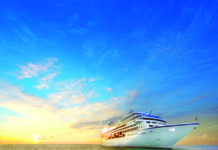 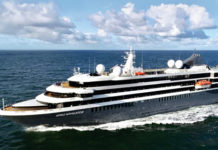