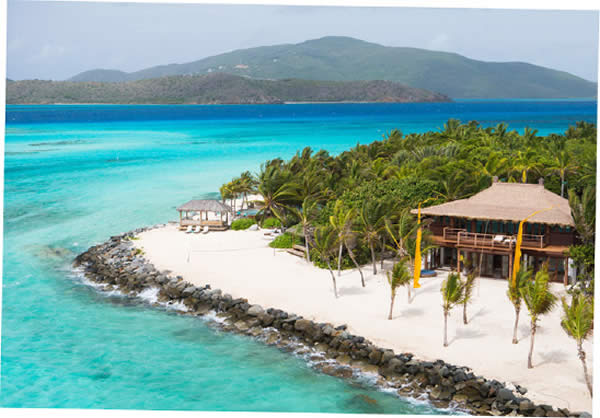 Travel professionals were shocked in 2011 when Necker Island’s Great House burned down. It doesn’t matter that this private island in the BVI was beyond the reach of most clients; Necker Island had raised the bar (indeed, many bars—for design, service, cuisine, ambience, and sheer fun) for hideaways everywhere, so it was sad to see this Balinese-styled palace destroyed. The good news is that Necker Island is now doing just fine, thank you, as are all the properties in Virgin Limited Edition, part of the Virgin Hotels Group. No surprise, really, for Sir Richard Branson created them with the same flair and vision he’s employed in the music and airline businesses.

In addition to Necker Island, the Virgin Limited Edition includes getaways in South Africa, Morocco, and Switzerland as well as London’s Roof Gardens and Babylon Restaurant, the Necker Belle luxury sailing catamaran, the Necker Nymph mini-submarine, and an estate in Australia. Like Sir Richard himself, the collection “is not your average cookie-cutter hotel group,” says spokeswoman Charlotte Tidball. “Each property is unique, with its own personality and soul.” However, they do have this in common: Each aims to create “amazing experiences” (Branson is not one to spend a week in a recliner), and they all excel in “barefoot luxury,” although clients probably should wear shoes to the London establishment. Really nice shoes.

• Guests have raved so much about the cuisine at Kasbah Tamadot—a 27-room/suite hideaway in a Berber region near Morocco’s Atlas Mountains mentioned in Recommend’s January issue—that it has instituted culinary lessons. Tamadot’s chef leads 3-hour sessions during which each budding chef gets a cooking station and learns how to prepare tagines and other specialties. High-season (April 1-May 31 and Sept. 1-Nov. 17) rates for 2013, including breakfast, start at $645 per room dbl, and $1,080 for a designer “Berber tent.”

• Within a year after the August 2011 fire that destroyed Necker Island’s Great House, management completed a new Beach Pavilion with 3,800 sq. ft. of lounging areas, dining space for up to 40 guests, a cinema/entertainment center, and smashing views. The 105-ft. catamaran Necker Belle was utilized for additional accommodations (the six Balinese-style cottages and secluded Love Temple were unscathed), and Sir Richard even opened his own home, Temple House, to guests. As emergency measures go, this ain’t bad.

The new Great House will open midyear. Like its predecessor, it will showcase Balinese style, but, says Tidball, “it will also include some innovative twists.” Necker Island accommodates 16-28 guests in a buyout whose rates (from $42,500) include watersports, tennis, superb cuisine and beverages, and spectacular design. Spa treatments and mini-submarine rides cost extra. Necker Island also offers by-the-room bookings during Celebration Weeks. In September and October those rates start at $26,000 per week per couple.

If there’s a flaw with all these retreats, it’s the lousy downhill skiing, so Virgin Limited also has a 9-room skiing/hiking lodge in Verbier, Switzerland. During winter The Lodge is mostly for buyouts, but sometimes rooms open up: In summer, they start at about $935 (including meals); the bunk room for up to six kids costs $500.

Finally, travel agents can book Makepeace Island, Sir Richard’s home near Australia’s Great Barrier reef, through Virgin Limited. There’s golf as well as every conceivable watersport, and rates for up to 22 guests are $3,405 per day plus $576 pp ($393 per child).

One more thing: Not only do guests savor extraordinary hospitality and experiences at these hideaways, but they can feel good about patronizing a company that leads effective sustainable development programs. Win-win.