luxor After arriving at the Luxor airport, our first stop was the Temple of Karnack, one of the most fascinating remnants of Egypt’s ancient civilization, connected by a 23-mile string of junior sphinxes stretching all the way to the Temple of Luxor—a kind of a statuesque, stone, honor guard that’s stood duty for several thousand years awaiting ruling Egyptian Pharaohs and priests to resume their annual ritual treks to one another’s temples to honor the gods.

The Temple of Karnack itself is a huge, sprawling compound comprised of numerous altars and ceremonial sections built on by a succession of pharaohs—not to mention a visit by Alexander the Great, dutifully reported on a mural on the wall depicting his strategy for conquering Egypt. But he didn’t do it by overwhelming them with his successful and storied armies, although he probably could have, he did it by showing the Egyptian royalty how much he admired and respected Egyptian culture by emulating Egyptian dress and culture. Alexandria, then, was a Greek city for centuries.

The huge complex is reported to hold the majority of the world’s antiquities and as one ambles through this expansive temple, it’s not hard to believe. We’re talking about a literal forest of huge columns reaching to the sky—all adorned with intricate engravings and endless hieroglyphics, many of which still maintain the original 4,000-year-old colors that adorn the literally thousands of engravings and murals found throughout the huge temple grounds. Here, too, is the world’s largest tallest obelisks and one of the most famous and definitely impressive sound and light shows you’ll find anywhere.

After checking into the m/s Tamr Henna, it was time to head off to the Temple of Luxor. While not quite as large as Karnack, it’s just as impressive with its unique array of antiquities and ancient architecture that has lost none of its impressive impact as you wander through its eerily lit labyrinth of huge statues, imposing squares and beautifully engraved and colored walls, all thousands of years old.

The next morning it was an early wake-up call again—5:30 a.m. for a 6 a.m. breakfast in order to be off the ship and on the bus as early as possible for a visit to the Valley of the Kings. It’s not that the destination is that far, it isn’t—it’s because of the heat on this West Bank Nile site and it’s essential to get there as early as possible because there’s an army of fellow travelers all trying to be at the head of the line to avoid sweltering in the sun. The story behind the Valley of the Kings is an interesting one. There are no pyramids here—that’s the whole point. The Egyptians were frustrated in their attempts to stop the grave robbing in the pyramids—they tried booby traps and making it harder to discover the bodies, but nothing worked. So they decided to change the burial grounds to this secret location and enlist an army of workers sworn to secrecy. It’s a desolate place and at a time when communication was rudimentary at best, they reasoned if they brought in people and built a self-sufficient community for them, complete with schools, stores and housing, it could work.

Of course, ultimately it didn’t—the grave robbers eventually found them, but in the interim, they built some of the most incredibly beautiful tombs—literally masterpieces of timeless art, mile after mile of walls lined with hieroglyphics telling the story of the royalty or wealthy and important man buried within. This is, in fact, the very place where King Tut’s grave was found in 1925, one of the few left undisturbed in the Valley of the Kings.

Make no mistake, with the huge number of people who visit the Valley of the Kings every day, this is not an easy in-and-out. The tombs open to visitors are more reminiscent of the entrance to a mine and long lines go in and out and line up like patrons of a blockbuster movie—think of waiting for a popular ride at a crowded amusement park. Guides are not allowed in because their explanations would slow the movement of people. As a result, tour groups gather outside while the knowledgeable guides tell them in detail about what they’re going to see—kind of like a football coach laying out a last-minute game plan before sending the boys in to kick tail. 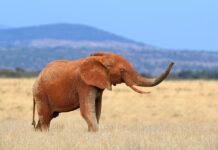 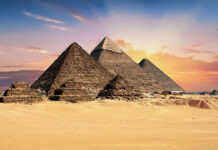 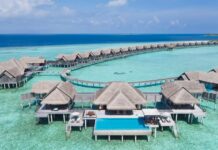