Like Caesar who long ago divided Gaul into tres partes, we recommend taking a three-corner tour of Chile, spending three nights each in: increasingly sophisticated Santiago; the archipelago of Chiloe, which is #37 on The New York Times list of the top 45 places to go in 2012; and Atacama, called the world’s driest desert. The result will be a perfect vacation of going to extremes, with Chile’s capital right in the middle.

In Chile, all roads (and air routes) lead to Santiago, which—with recent additions of smartly designed hotels and fashion-savvy boutiques, modern museums and arts spaces—is on a fast-track to becoming one of the liveliest capitals in the Americas. And getting to Santiago is quite easy with nonstop flights from the U.S. on LAN Airlines, American Airlines and Delta Air Lines.

In recent years, the government has invested in cultural spaces such as the Centro Gabriela Mistral, now offering a varied calendar of performing arts, and privately financed is the remarkable new Museo de la Moda, whose vast couture collection includes Jack Lennon’s light-blue jacket and a strapless gown worn by Diana, Princess of Wales.

Plan for clients to enjoy a city tour using the Metro (not during commuter hours), the fastest and most agreeable way to get around town. En-route they will find the subway stations adorned with murals painted by some of Chile’s most important artists. Of course, essential capital sites remain the Museum of Pre-Columbian Arts; the Mercado Central piled high with fresh produce, fish and seafood; and Los Dominicos Handicrafts Village, an emporium of fine artisan products. And a day away from Santiago means touring and tasting in wine country or driving to Viña del Mar and Valparaiso on the Pacific coast.

Chiloe remains a world apart, a remote and densely forested island-group known for its stilt-built houses, 150 UNESCO-designated wooden churches, nature preserves, unusual birds and wildlife, and friendly people. Lying some 650 miles south of Santiago, the main Isla Grande de Chiloe is about the size of Cyprus, making it the second largest island in South America, after Tierra del Fuego. Clients fly from Santiago to Puerto Montt, with a 50-mile transfer to the port of Pargua to board the car ferry for a beautiful 30-minute channel crossing, often in the company of frolicking porpoises. The first stop is the rambling port town of Ancud, whose main attractions are the markets and the Museo Chilote, with exhibits ranging from natural environment and wildlife, to regional archaeology and church art and architecture. Chiloe’s interesting capital is Castro, a good overnight choice, an excellent excursions’ base, and one soon to host the island’s first airport, which will receive direct flights from Santiago (LAN, incidentally, provides domestic flights). Castro’s two major attractions are architectural: the colorful palafito houses built atop stilts over the water and the neo-gothic San Francisco Church, painted in lilac and peachy pink for Pope John Paul II’s visit in 1987.

Clients have many small hotel choices for a Chiloe vacation. In Ancud, we recommend the water views from everywhere at Hosteria Ancud, facing the Gulf of Quetalmahue. The hotel—with rates from $101 dbl—has 24 nicely furnished rooms with complimentary WiFi. The bar is cozy with a giant fireplace and the very good restaurant serves up Chilean and international dishes, starring superb fish and seafood ingredients. In Castro, Palafitos 1326 is tops. The boutique hotel is brilliantly tucked into a rebuilt traditional palafito and furnished stylishly with imaginative contemporary interiors and lots of local textiles. There are 12 guestrooms, and those with sea views come with a small balcony. Public areas include a small breakfast room, library and roof deck; WiFi is complimentary. Rates start at $116. 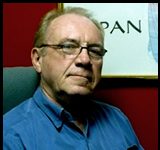 Welcome to the May Issue of Recommend 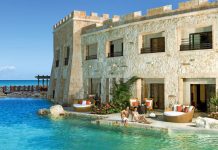 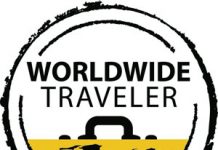 Worldwide Traveler Gets a Head Start in a Global Undertaking 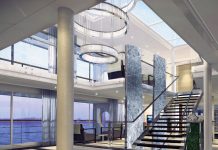 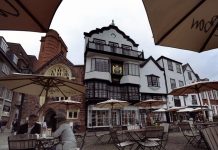