When it rains in the Cook Islands the whole world seems enameled in sheets of warm water, veiling the beauty of this archipelago that sadly receives but a passing mention within conventional tourism circles.

Raindrops sparkling in tropical sunlight inevitably lead to hackneyed cliches about a drizzle of diamonds. When the rain stops and Australasia’s intense sunlight paints the islands all gold and green and blue, out come dog-eared comparisons to emeralds and sapphires.

But it only takes a day or two to realize the descriptions are apt. Likening the Cook Island to precious jewels, as trite as it sounds, somehow befits the place, for these islands are indeed gems. Indeed, they are even known in gemological circles for the splendid black pearls harvested here.

The Cooks are an artist’s landscape. They’re infused with the tropical panache of Tahiti blended with the mystique of an Eden where life runs easy in an astounding backdrop. Coming here is like jumping in a time travel capsule landing in Hawaii as Hawaii must have been some 90 years ago.

The Cook Islands will enchant visitors from the first “kia orana”—a Maori expression meaning “welcome,” a phrase used liberally by islanders all through your visit here.

Perhaps the most appealing asset of the Cooks is that very few travel enthusiasts can pinpoint them on a map. They lie slightly northeast of New Zealand, roughly between American Samoa and Tahiti. Although huge in area (15 islands sprawled over 850,000 sq. miles, a tad east of the international dateline) their land mass is miniscule.

Still, odds are this nation connected by defense and economic treaties with New Zealand is bound to become a hot destination. And now is the time to send your clients to this slice of paradise, not only for bragging rights, but also because it is still an inexpensive alternative to its better-known neighbors, Tahiti and Bora-Bora.

At times, it seems life here has only two paces: languid and carefree. Often it seems the fastest moving objects here are the regal coconut palms swaying in the breeze. But that’s deceiving—like most notions about the Cooks.

Not that far back, the only way to reach the Cook Islands from the U.S. was through time-consuming, grueling connections from Honolulu or New Zealand. Of course, cruise ships have always called on Rarotonga, the largest, most populous and developed island, a place that for years has been a romantic honeymoon destination for New Zealanders who come here after a flight lasting less than three hours.

However, two years ago Air New Zealand introduced a weekly direct flight from Los Angeles to Avarua, the capital and most populous city, a quintessential, small South Seas port in Rarotonga. The flight is a vital pipeline for North American and European tourists who come searching for the islands’ unmatched tropical mystique.

Recently, impelled by the worldwide economic recession, the airline considered cancelling the flight, but the Cook Islands government—recognizing the route’s critical need—prompted Air New Zealand to scrub the plan.

Wilkie Rasmussen, Cook Islands’ minister of tourism, explains that, “Economic analyses demonstrated the prudence of continuing to invest in this critical route in order to sustain our tourism earnings.” He adds that tourism projections are encouraging, despite the current dour economic picture.

rarotonga The first glimpse of Rarotonga—after a 10-hour journey from Los Angeles made easier by Air New Zealand’s relaxed service and hospitality—reveals that one has set foot in a place unlike any on earth. The sweet smells of frangipani and gardenia are evident from the minute the aircraft doors open, and arrivals instinctively feel as if they’ve stepped into a travel brochure written by Melville and illustrated by Gauguin.

A discreet sign on an airport wall announces that islanders would be insulted by something as crass as receiving tips for doing things they’re eager to perform. Understanding that, there’s a genuine joy in the air, and gentle Maori tunes waft from unseen speakers.

Life is so tranquil here that some have mused that the Cook Islands is the destination where nothing comes to do nothing, a place where relaxation is a sport. 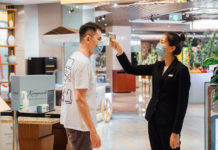 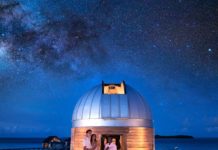