How can you top a 100th anniversary? Having recently celebrated the centennial of Transfer Day (March 31), when Denmark transferred its Caribbean islands to the United States, U.S. Virgin Islands commissioner of tourism Beverly Nicholson-Doty has a plan sure to get a lot of attention. The U.S.V.I. has announced a Centennial Plus program, wherein an all-star team of tour packagers are offering visitors a fourth night free and $400 in spending credits. This promotion started as a consumer-based initiative that was so successful, says Nicholson-Doty, that “we wanted to sweeten our offer.”

A Lift for Airlift
Meanwhile, United Airlines has announced that it will once again offer daily flights from Washington, D.C., to St. Thomas, and it will continue its summertime Saturday flights from Newark, into September and October. What’s more, it’s expanding Houston-St. Thomas nonstops from four to seven a week from June 8 to Aug. 14. If you’re surprised by daily flights from a southwestern city that’s much closer to Mexico than to the Caribbean, Nicholson-Doty has a bigger surprise, “Did you know that Texas is now one of our top five markets?” Then she adds, “California is now in the top ten.”

Visitors are finding good things besides deals and airlift, too. “Last week we reopened Fort Christian in St. Thomas, which had been closed for ten years,” says Nicholson-Doty. “This is our crown jewel, built in 1738 and the oldest structure in the Virgin Islands.” Among other sites attracting more visitors on St. Croix are the Whim Museum, once a working plantation that has windmills and a living museum with costumed guides. The Cruzan Rum Distillery also continues to lift visitors’ spirits.

Aside from its myriad pink building facades, St. Thomas boasts “a 400-year-old Moravian church, the second oldest synagogue in the Western Hemisphere, rare murals in the Emancipation Gardens Post Office, and a historic school that’s being restored,” says Nicholson-Doty. She’s also pleased by the growth of culinary festivals and tours.

Danish Bookkeeping, Irish Names
With all this, heritage travel is on the rise. “The Danes were meticulous in their record keeping, from baptism to slavery records,” explains Nicholson-Doty, “and on the occasion of the centennial, Denmark has turned over even more documents to us. Now people are coming back from the mainland to trace their ancestry. Many of them have Irish last names and don’t even look African-American,” she says.

“This has given us a chance to reflect on who we are as a people. It certainly has been enlightening to me and to share that with visitors.” She adds, “We’re more than the beach.”

For more information, go to visitusvi.com. 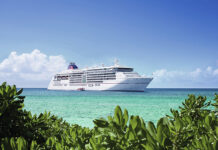 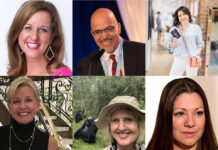 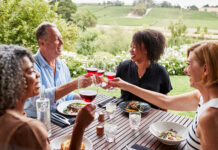