SEE: This is Rio, so beaches are a given must-see, especially when the sun sets over their shorelines (not even the locals miss those). There’s Copacabana, of course, as well as Ipanema (sports lovers should look for Posto 10—the beach is subdivided by posts—as there’s always some sort of game, soccer or otherwise, being played along this stretch of sand). Must-visits while in Rio include taking a cable car ride up to the top of Sugar Loaf Mountain as well as a tram ride up to the summit of Corcovado, home to the world-famous Christ the Redeemer statue, plus a stroll through the Botanical Gardens, with over 8,000 plant species, and the Santa Teresa neighborhood, with its winding, narrow streets full of historic mansions and reached via tram. Tell clients to mingle with locals in open-air cafes, dance to the samba in local dance halls, explore the myriad churches that stem from the 17th to the 20th centuries, take a helicopter tour to get a bird’s-eye view of this fascinating city, and then simply take it all in and bask in the excitement of this city of six million people who know how to truly savor life.

STAY: A member of The Leading Hotels of the World, the Philippe Starck-designed Hotel Fasano Rio de Janeiro is located in the heart of Ipanema Beach and offers a fabulous mix of Brazilian materials with Grecian marble, 19th century Argentinean brick and Chinese onyx. Guestrooms feature private balconies with sweeping views of the ocean, the restaurant offers Italian-Mediterranean cuisine, and the Renata de Abreu Spa offers La Prairie treatments—need we say more? (fasano.com.br)

WORLD CUP VENUE: Maracana Stadium (capacity: 73,531 spectators); will host seven games in all, among those will be the Final on July 13.

SEE: This is the country’s business and financial hub, and as such is one of the world’s largest cities by population—some 11 million people call Sao Paulo home. High-energy means an array of sights to keep visitors busy beyond the stadium doors—there’s a good reason it’s known as the country’s cultural capital. Museums, such as MASP (the Art Museum of Sao Paulo), are first-rate, and the dizzying number of high-end shops (take those heels over to Rua Oscar Freire) and markets (a must is Sunday’s Liberdade flea market) make this a hotspot for shopaholics. There are also magnificent churches to “discover,” including the 20th century Metropolitan Cathedral. When your clients are done strolling through this buzzing city, and want to slip away tell them to either make their way to Latin America’s largest urban park, the 400-acre Ibirapuera Park, or head up to the top of the Banespa Skyscraper, where a view of this vast city from the observation deck is unbeatable.

STAY: The 57-room Hotel Emiliano, a member of The Leading Hotels of the World, is a study in sophistication stemming from its very location in the heart of the very exclusive Jardins neighborhood on Rua Oscar Freire. Here, minimalism reigns within the guestrooms, of which there are only three per floor, and for visitors who truly yearn privacy, the hotel offers a rooftop helipad. The spa is being renovated, but guests have access to the very chic Champagne & Caviar bar, as well as a restaurant that serves up Italian fare using local ingredients. (emiliano.com.br)

FLY: Visitors from the U.S. can take a nonstop flight on board American Airlines from Miami to Confins International Airport, located 25 miles from the city. (Airport code: CNF)

SEE: Located in the state of Minas Gerais, this gateway to the state’s “Gold Cities”—with their winding cobblestone streets, baroque churches, and colorful markets—does have a few treasures of its own, including impressive views of the surrounding mountains. There’s also a plethora of cultural must-dos, including visiting the very charming Cafe Com Letras, a bookstore that showcases the city’s music and arts scene; the Pampulha District, home to famed architect Oscar Niemeyer’s creations; and the Palacio das Artes, the city’s arts complex. Recommend clients take some time to sit down for a bite to eat—if they don’t mind waiting in long lines to get a seat—at the renowned Casa Cheia, a Mercado Central eatery that’s an institution (the mercado itself is also a must-hang out).

STAY: The Othon Palace, with 295 rooms and suites, overlooks the lush greenery of the city’s Municipal Park and has a good location in the downtown area along tree-lined Alfonso Pena Street. Guestrooms range from standard to the presidential suite, and the onsite restaurant cooks up Brazilian cuisine and offers breathtaking views of the city and the mountains beyond. (othon.com.br/en) 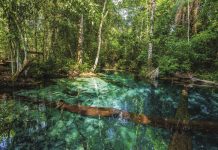 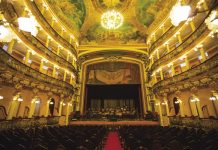 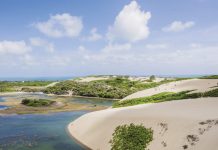 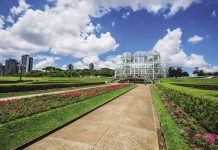